In retrospect it seems ironic that our introduction to “Practicing Sovereignty” started with “Things don’t always go as planned” – because here we are now, things did not go as planned. Our event had to be cancelled due to the ongoing pandemic, just one day before the opening. This post is meant to give you an impression of some of those exhibits which were already assembled at the time of the cancellation.

Enjoy! Meanwhile we are trying to find a solution to maybe realise the project in another way, at another point in time. 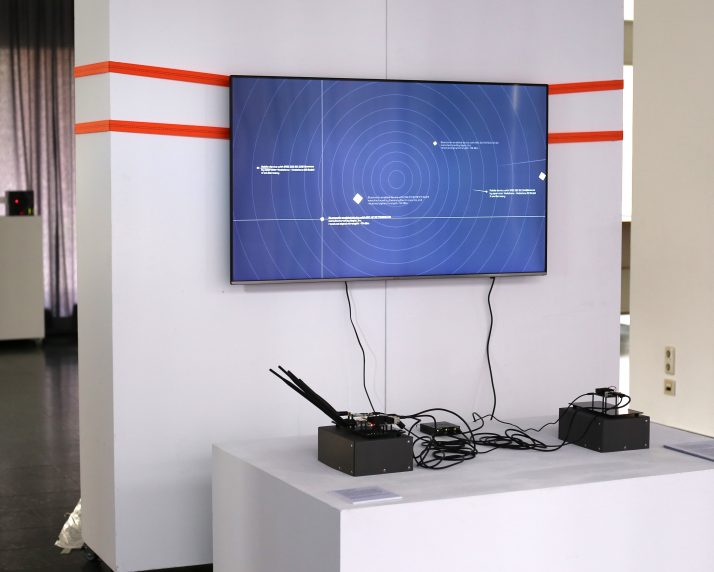 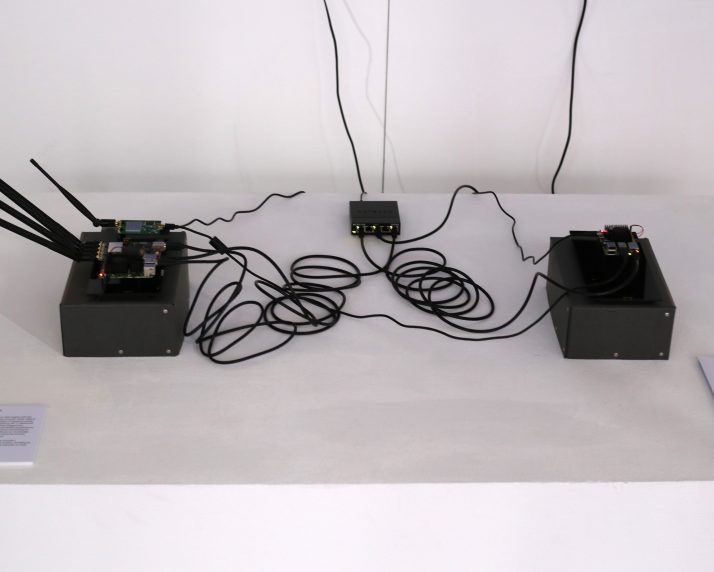 Our strive to regain control of our data begins with the understanding of where and how it travels. Radio Atlas is an installation composed of multiple computers probing radio frequencies typically occupied by Wi-Fi, Bluetooth and Mobile networks. Through these frequencies, smartphones, our most intimate and faithful possessions, are constantly announcing themselves and looking for familiar systems and networks without our knowledge. Because of this, these devices can easily be tracked, confessing patterns of our daily lives. Radio Atlas is an attempt to visualize, provide a cartography, of the surrounding radio entities, revealing an unexplored space that is invisible and unknown to most, and yet extremely crowded.

Claudio Guarnieri is a security researcher, free software developer and artist. He researches the use of technology as a mean for repression, and provides assistance to human rights organizations, journalists, and activists with issues of computer security, privacy and surveillance. 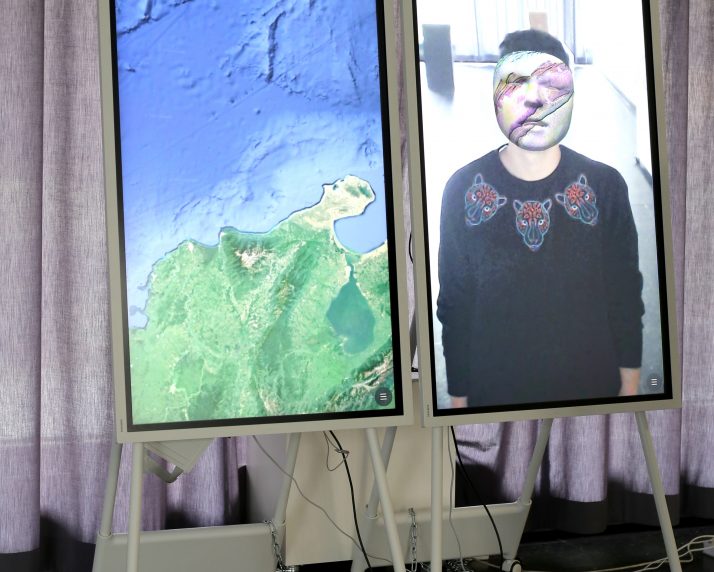 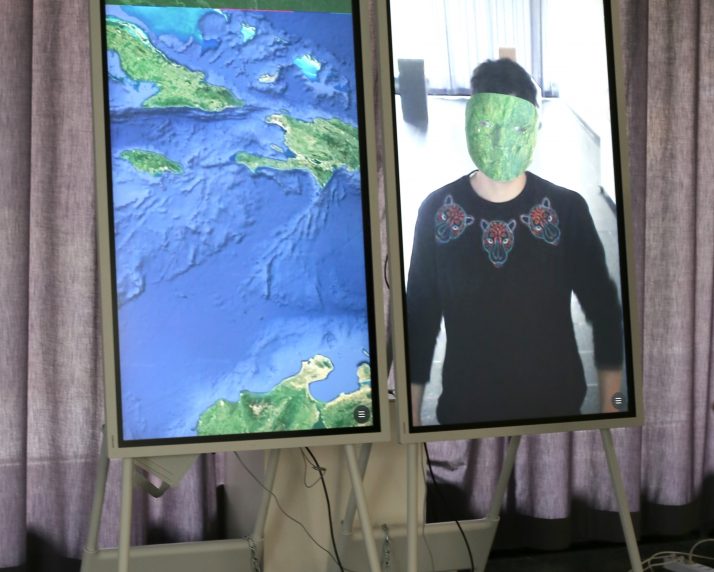 Since the implementation of a peace agreement in December 2016, over 265 social leaders and environmental activists have been systematically murdered in Colombia. The number keeps rising every week at the same time that territories formerly controlled by guerrilla group FARC, suffer from illegal mining and deforestation. Meanwhile, devices on the market continuously track our geolocation while the data obtained is exploited for advertising proposes and surveillance. What if we were to purposefully reveal our geolocation? Could we warn of and denounce environmental harm in our territories whilst protecting our identity? Geofilters is an experimental reaction and investigation of the environmental situation in Colombia. It explores ways of revealing while hiding. GeoFilters is a collection of face filters generated using the texture of satellite pictures. The images depict the geo-position of a territory under environmental threat. This project seeks to draw parallels between data exploitation and territory exploitation, exploring ways of reappropriating one’s own data to reclaim digital and physical territories.

Facial recognition algorithms rely on millions of training images to understand what makes us each unique. But this requires access to millions of people’s images, which are often scraped from the Internet by tech corporations and security authorities without consent. The MegaPixels: Dataset Portal installation uses real-time face recognition to query these datasets for your image – datasets which were not created by the artist but which are harvested by tech corporations and security authorities from social media or CCTV data. During this installation in the Practicing Sovereignty exhibition, the face search will compare your face to over 10.000.000 images from several of the most widely used training datasets including MS-CELEB-1M, MegaFace, and the IARPA Janus Benchmark datasets.
MegaPixels: Dataset Portal critically invsestigates the far-reaching implications of big data harvesting for images of people accessible online in order to spark necessary discussions about the exploitation of image data by commercial and governmental organizations to train facial-recognition algorithms. The project received widespread attention, including international press coverage on questions of privacy by newspapers and journals such as The New York Times or The Financial Times Magazine – the latter headlining in September 2019: “Who’s using your face? The ugly truth about facial recognition”

Adam Harvey (US) is a researcher and artist based in Berlin focused on computer vision, privacy, and surveillance. Most recently, Harvey developed VFRAME, a comptuer vision project that helps human rights researchers use visual forensic tools for OSINT investigations. VFRAME received an Award of Distinction from Ars Electronica in 2019 and was selected as a nominee for the EU STARTS prize in 2018.

INTERPART team, Talk to Me. A polyphonic doorbell installation (2020) 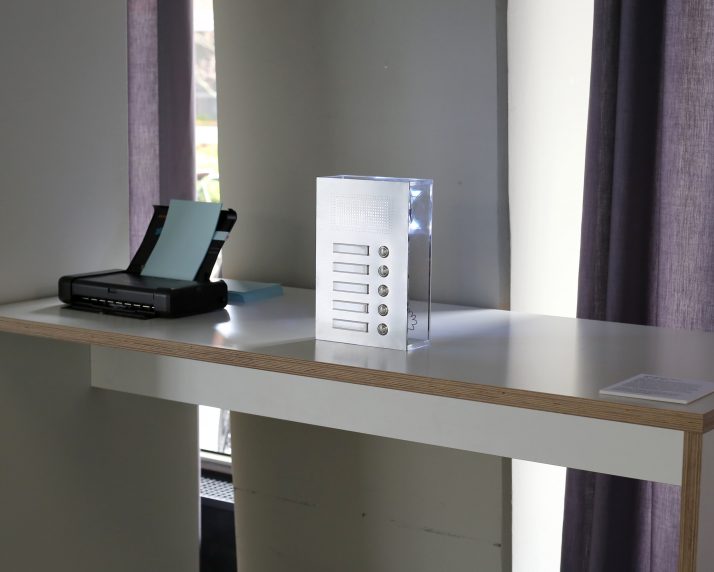 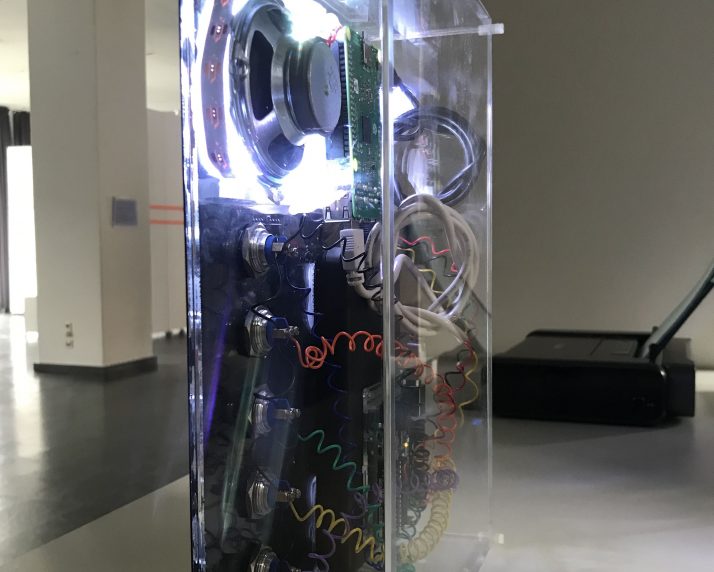 The interactive, multi-lingual installation is a critical design device addressing intercultural spaces for participation and dialogue in urban development. The doorbell installation combines different experimental approaches: In a combination of eye catcher and cross-media user interface, it opens up the possibility of examining how personal interaction with local people could be combined with a digital tool to address diversity while involving people in participatory processes. The installation was developed by Bianca Herlo, Malte Bergmann, Sandra Stark, Lutz Reiter, Christian Pflug and Alexa Beckmann as a research tool and together with all partners in the cooperative research project INTERPART.

INTERPART (2018-2021) is a co-operation between TU Dortmund, Berlin UdK, UrbanPlus, Zebralog, Senat Administration for City Development Berlin, City of Wiesbaden and is funded by the Federal Ministry for Research and Education (BMBF). 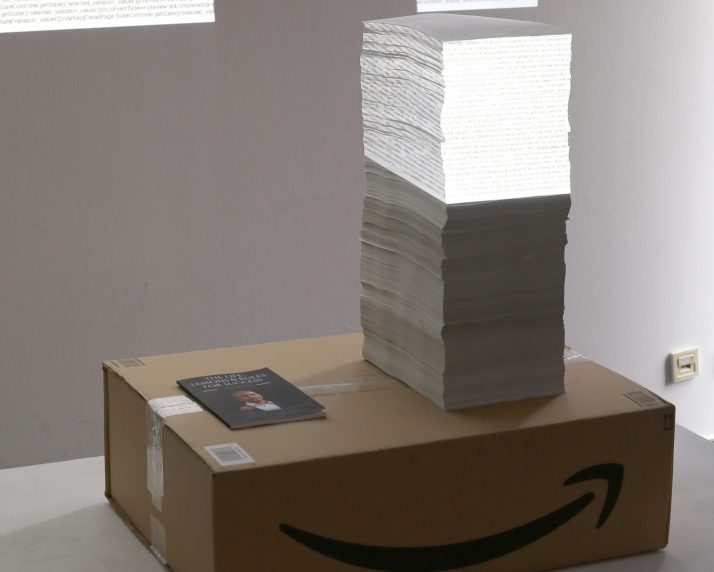 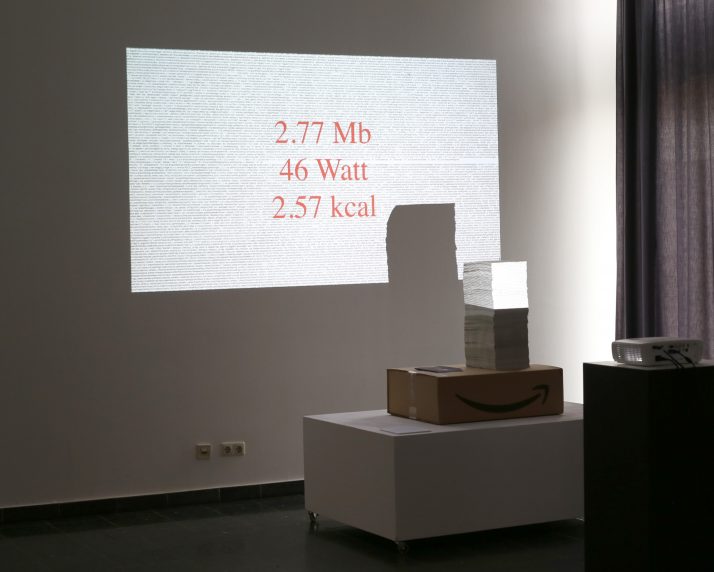 “The Life, Lessons & Rules for Success: The Journey, The Teachable Moments & 10 Rules for Success cultivated from the Life & Wisdom of Jeff Bezos” was purchased at Amazon on June 17th 2019. In order to purchase the book, Amazon forced the customer to go through 12 different interfaces made of large amounts of code. Overall, we could track 1307 different requests to all sort of scripts which equaled to 8724 pages of printed code and 87.33Mb of data. Amazon’s business model is based on “obsessive costumer focus”, which entails the continuous tracking of customer behavior in order to amplify the monetization of the user. Thus, the 87.33Mb of code responsible for tracking user activity that were involuntarily loaded by the customer through the browser, relentlessly put Amazon’s core money-making strategy at work. Moreover, all the energy needed to load all this data was effectively unloaded upon the customer, who ultimately assumed not just part of the economic costs of Amazon’s monetization processes, but also a portion of its environmental footprint. The piece narrates the journey of the customer within the labyrinth of interfaces and code that allowed to buy Jeff Bezos’s book while witnessing the mounting energy costs that were helplessly paid for by the Amazon customer.

This work was realized within the framework of the European Media Art Platforms EMARE program at IMPAKT with the support of the Creative Europe Culture Programme of the European Union.

Joana Moll is a Barcelona/Berlin based artist and researcher. Her work critically explores the way post-capitalist narratives affect the alphabetization of machines, humans and ecosystems. Her main research topics include Internet materiality, surveillance, social profiling and interfaces. 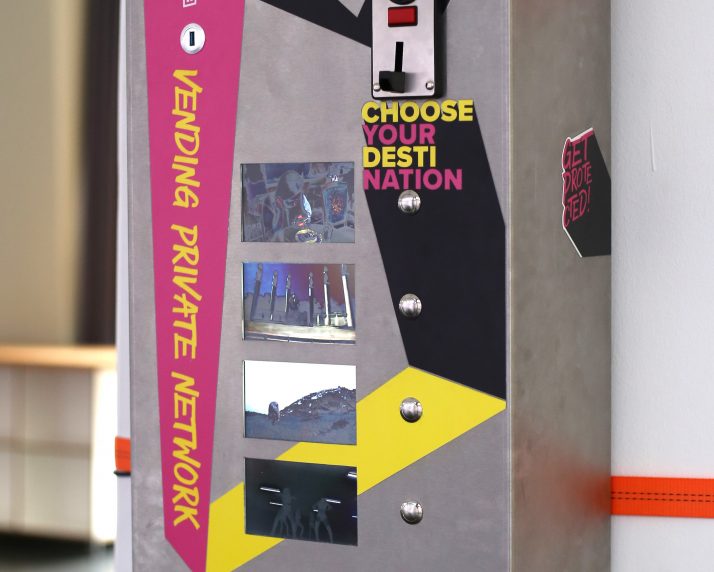 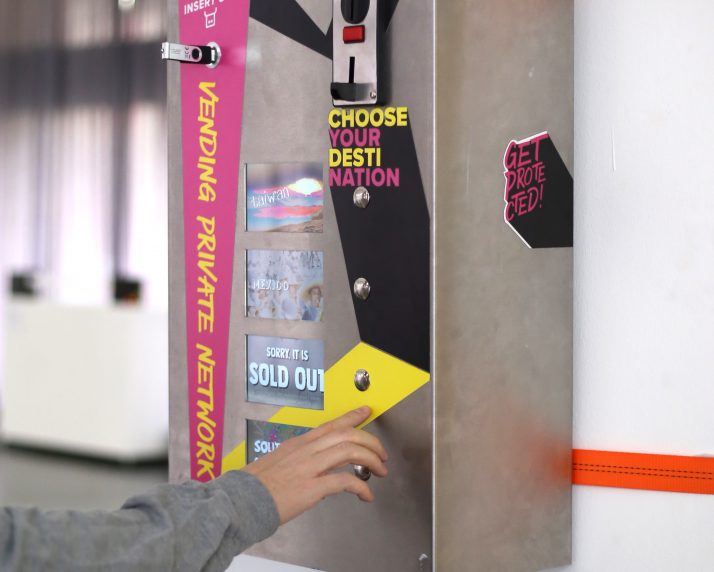 Vending Private Network offers four different ways to surf the internet securely and privately. The virtual private network (VPN) you select will disguise your internet traffic by making it look like it is coming from a vacation destination. Insert a USB stick into the slot, and a coin into the machine, then select a destination. The machine will write a file onto your USB stick that grants you access to a private network for browsing the internet. You will also receive instructions explaining how to use the VPN in a hidden or ‘sheathed’ way that is safe from anyone who might want to track your internet activity. Being able to use the internet safely and privately is crucial, especially for people in certain countries. Each purchase made using VPN machine goes toward maintaining the network that provides this service for free to people in countries where government surveillance of the internet is prevalent.

Julian Oliver is a New Zealander, Critical Engineer, systems administrator and electronic artist based in Berlin. He is an advocate of Free and Open Source Software and is a supporter of, and contributor to, initiatives that reinforce rights of privacy and anonymity in networked and non-networked domains. 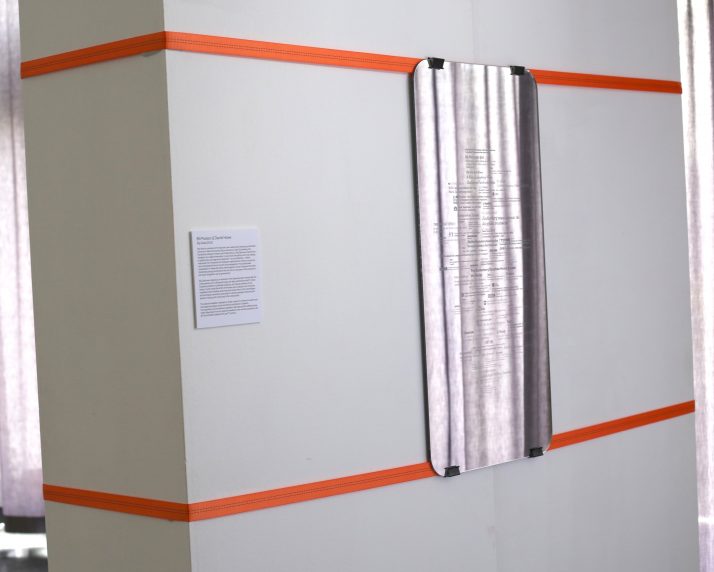 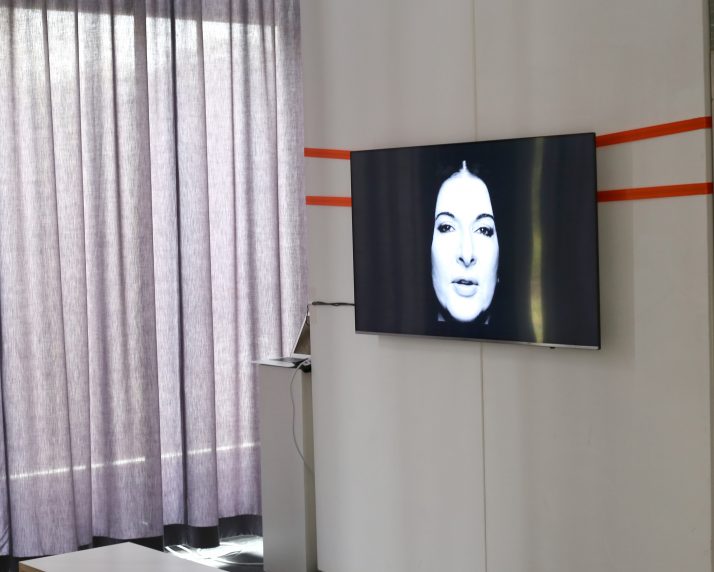 Big Dada is comprised of 6 ‘deep fake’ new media works featuring synthesized personas of Marcel Duchamp, Marina Abramović, Mark Zuckerberg, Kim Kardashian, Morgan Freeman and Freddy Mercury. Big Dada was inserted into Instagram as a digital intervention in June 2019 and quickly went viral, leading to global press coverage and unexpected – and contradictory – official responses from Facebook and Instagram regarding their policies concerning new computational forms of power and propaganda. The sophisticated manipulation of videos like these, which appear to show Facebook CEO Mark Zuckerberg saying something he did not, led to a European Union proposal to ban facial recognition use by government. Big Dada was created as an extension of the Spectre project. Named after the online persona of Dr. Aleksandr Kogan, the data scientist that sold 87 million Facebook profiles to Cambridge Analytica, and making reference to the twenty-fourth James Bond film of the same name, Spectre is an immersive installation that simulates, detournes and reveals many of the technologies and techniques commonly used today to influence people’s behaviors and decision making: both online and in the voting booth. The Spectre installation attempts to create a space for viewers to explore and interrogate the deeper social and ethical implications of Dataism, Psychopolitics and Surveillance Capitalism. Big Dada and the additional new media ‘deep fakes’ from the Spectre installation were recently acquired by the BFI for the British National Film and TV archive.

Bill Posters is an artist-researcher, author and facilitator who is interested in art as research and critical practice. Poster’s works often interrogate persuasion architectures and power relations that exist in public space and online, working collaboratively across the arts, sciences and advocacy fields.

Daniel C. Howe is an artist and critical technologist whose work focuses on the relationships between networks, language, and politics. His hybrid practice explores the impact of networked, computational technologies on human values such as diversity, privacy and freedom. 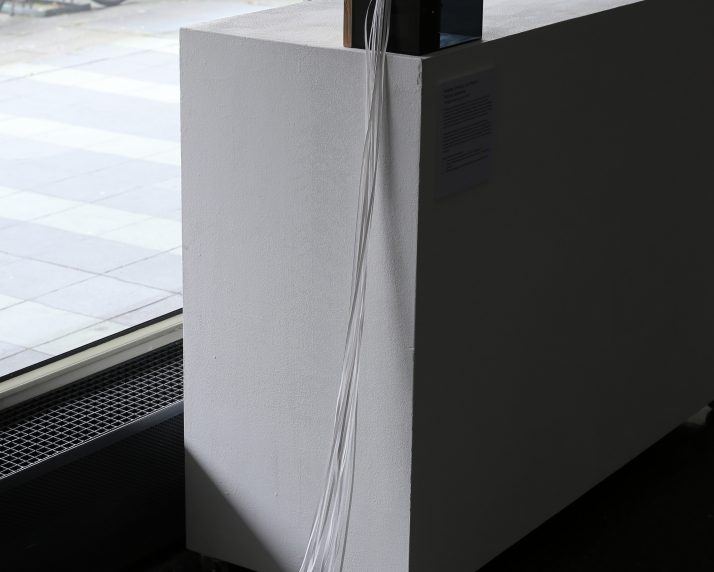 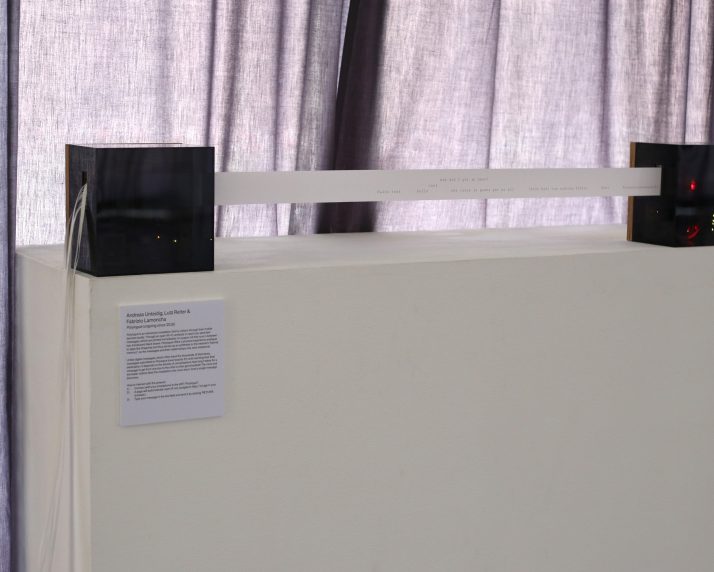 Polylogue is an interactive installation fed by visitors through their mobile devices locally. Through an open wifi, anybody in reach can send text messages, which are printed immediately on a paper roll that runs in-between two translucent, black boxes. Polylogue offers a physical experience analogue to apps like Snapchat and thus serves as an antithesis to the internet’s „eternal memory“, as the messages and their relationships only exist situational. Unlike digital messages, which often travel for thousands of kilometres, messages submitted to Polylogue travel exactly 2m until reaching their final destination. It depends on the density of conversations how long it takes for a message to get from one box to the other to then get shredded: The more and the faster visitors feed the installation, the more short-lived a single message becomes. 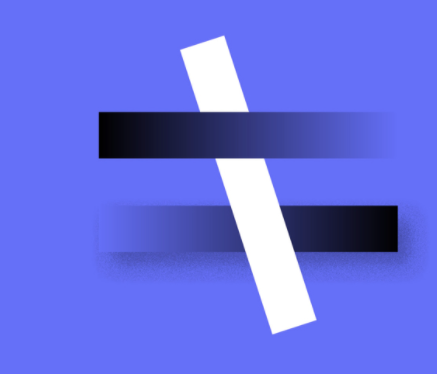 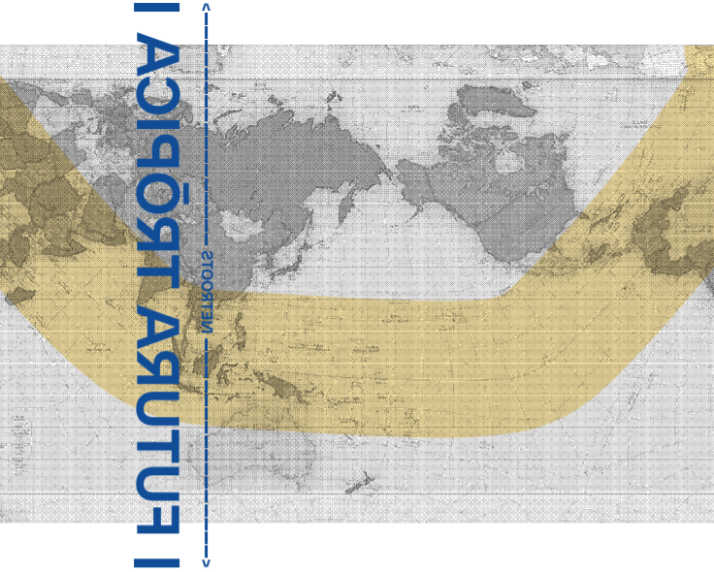